Unregulated traders are using the sites to sell some of the world’s most invasive plants, with potentially devastating impacts on ecosystems 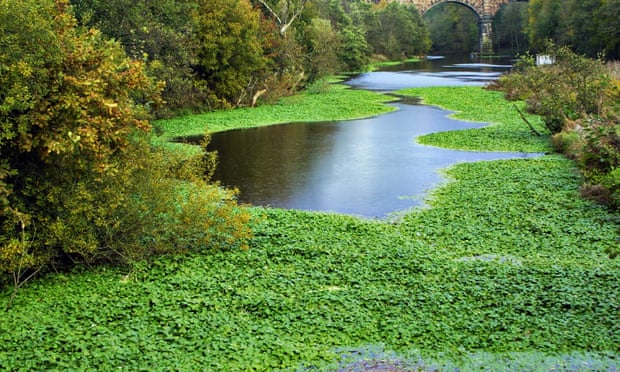 Invasive aquatic weed, pennywort, on the River Weaver in Cheshire. The plant was advertised for sale on eBay to ship to the UK. Photograph: Pat Bennett/Alamy

Amazon and eBay appear to have openly broken the law by hosting listings to ship banned invasive species to the UK, the Guardian can reveal.

Both eBay and Amazon have previously been criticised for hosting ivory traders, but the UN Convention on Biological Diversity (CBD) rates invasive species as a more significant threat to biodiversity than poaching for animal parts. In February, the CBD said there was an “urgent need” to control the vast, unregulated network of online traders who buy and sell these pests across the globe.

In the UK, the government has banned seven species of aquatic weed from sale or advertisement in England because they have destructively colonised rivers and waterways. But at least three were openly available for sale on eBay and one on Amazon for delivery to any Briton with a credit card. Read more.

Only 3 wild addax left in the world?

Horns of a dilemma: retiree to fly 80 South African rhinos to Australia﻿