People living upriver from gold-mining are the most contaminated, according to US-based scientists 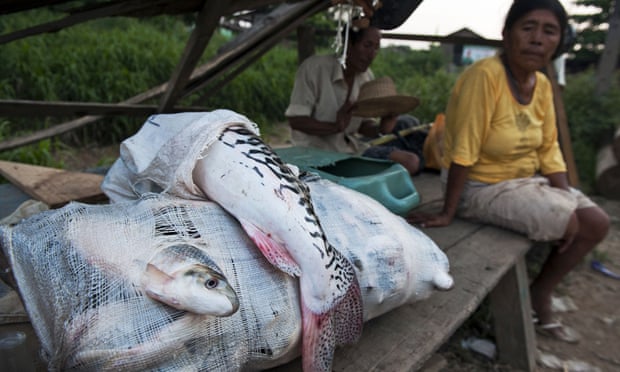 Fish from the River Madre de Dios in Peru. Fish consumption is considered one of the two main ways mercury contamination has spread among local inhabitants – including those living upriver from gold-mining. Photograph: Cris Bouroncle/AFP/Getty Images

Ask about the fish in restaurants in the centre of Puerto Maldonado, the biggest town in Peru’s south-east Amazon, and you’ll hear all kinds of things. Some people will shake their heads and say there isn’t any fish on the menu “because of the contamination” or “out of protocol”. Others might say there is fish available, before sometimes hastily clarifying that it comes from farms along the Inter-Oceanica Highway running to Brazil, or from the Pacific coast, or even, according to one chef, all the way from Vietnam.

Why such problems with the fish in this part of the Amazon? Answer: alluvial gold and the mercury required to extract it. The gold-rush in the 8.5m hectare Madre de Dios region began in the 1980s and, by 2012, miners had destroyed more than 50,000 hectares of forest, effectively dumping 100s of tons of mercury into the rivers while doing so. Read more.

Ground Zero of the Dinosaur Extinction

Why Does Fall Foliage Turn So Red and Fiery? It Depends.