How to get mosquitoes to breed themselves to death

From the print edition 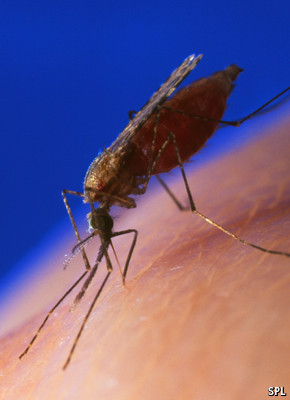 KILL the mosquito and you kill the disease. That is the usual approach to controlling malaria. And if done properly, it works. The problem is that the insecticides employed to do the killing destroy lots of other things as well. An old dream of those who seek to eliminate malaria is thus a way of selectively killing only what transmits the parasite: mosquitoes of the genus Anopheles, most notably Anopheles gambiae. And that, more or less, is what is proposed by Nikolai Windbichler and Andrea Crisanti of Imperial College, London, in a paper in Nature Communications. They think they have worked out how to stop A. gambiae females being created in the first place. That would break the chain of transmission in two ways: immediately, because it is only females that drink blood and so pass the parasite on; and in the longer term because without females a population cannot reproduce. Read more.