Massive mangrove die-off on Gulf of Carpentaria worst in the world, says expert

Climate change and El Niño the culprits, says Norm Duke, an expert in mangrove ecology, after seeing 7,000ha of dead mangroves over 700km 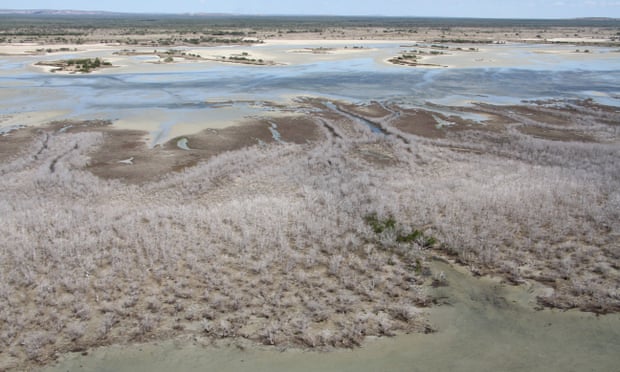 Aerial footage of ‘unprecedented’ mangrove die-off in the Gulf of Carpentaria in mid 2016. The die-off is

Aerial footage of ‘unprecedented’ mangrove die-off in the Gulf of Carpentaria in mid 2016. The die-off is thought to be a result of low rainfall and warm temperatures. Photograph: Professor Norm Duke/James Cook University

Climate change and El Niño have caused the worst mangrove die-off in recorded history, stretching along 700km of Australia’s Gulf of Carpentaria, an expert says.

The mass die-off coincided with the world’s worst global coral bleaching event, as well as the worst bleaching event on the Great Barrier Reef, in which almost a quarter of the coral was killed – something also caused by unusually warm water.

And last week it was revealed warm ocean temperatures had wiped out 100km of important kelp forests off the coast of Western Australia. Read more.